On June 12, the Golden State Warriors defeated the Cleveland Cavaliers. With a 4-1 record, the Warriors emerged as champions during Game 5. Here’s the scoop:

Game 5 of the NBA finals took place at Oakland’s Oracle Arena. Here, the Golden State Warriors emerged as victorious champions. The final score was 129-120, a Warriors victory. The Warriors scored an average of 32.25 points per quarter, while the Cavaliers averaged 30 points. Motion Station’s YouTube video, which covers the Warriors victory, now has over 510,329 views. Today, it was #14 on YouTube’s trending list. See below: 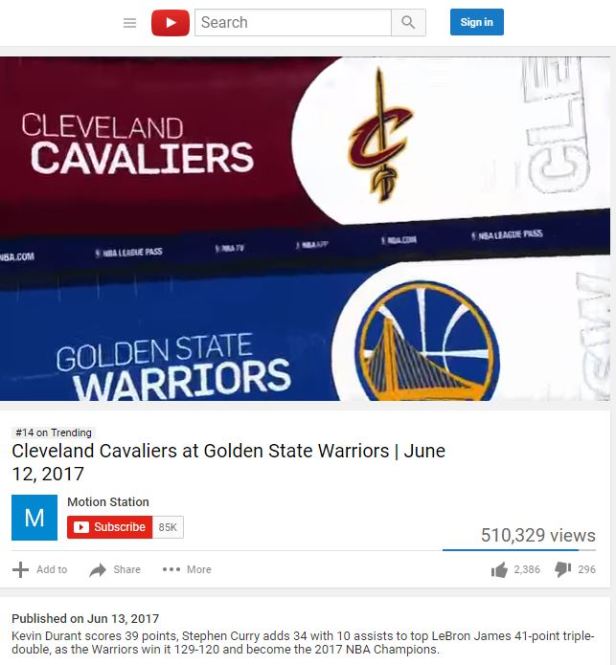 Durant is the third player in history to win at least 4 scoring titles, one NBA title, and the Finals MVP trophy during his first year with a team. NBA commissioner Adam Silver presented Kevin Durant with the Bill Russell 2017 MVP award. With a 35.2 PPG, Kevin Durant is the fifth player in history to average 30 points per game in six straight NBA Finals games. In the 2001 NBA Finals championship, Shaquille O’Neal achieved this same feat with 33 points per game. See the slideshow below:

The Golden State Warriors scored a 31-2 victory in the last thirty-three games. The Warriors also scored 100 points in all seventeen games during the postseason. This is the longest streak since 1987; now, the Warriors have set a new record.

Steve Kerr is the fourth coach to win multiple NBA titles within the first three seasons of coaching. Doris Burke inquired, “How did this group add such an incredible talent and blend Kevin Durant in seamlessly and somehow yet let him be his own brilliant self?”

Kerr responded, “I’ve got the best job in the world. These guys are so gifted, and committed to each other, and so unselfish. And I love the players, I love the coaches… Bob Meyers has been such a good friend these last couple of years.”

The Golden State Warriors emerged as victorious champions through agility, drive, and teamwork. Together, the Warriors broke basketball records with their determination. Their Game 5 victory exemplifies the strength of numbers and persistence.