Sofia Carson, Alex Aiono, Kelsea Ballerini, Jordan Fisher, and Jenna Ortega hosted the 2017 Radio Disney Music Awards. This telecast started with a countdown to the Descendants 2 world premiere. The Disney Channel will air this movie on Friday, July 21 at 8:00pm. This premiere featured the high-energy “Wicked” music video. Today, this video is #19 on YouTube’s trending list. See the screenshot below: 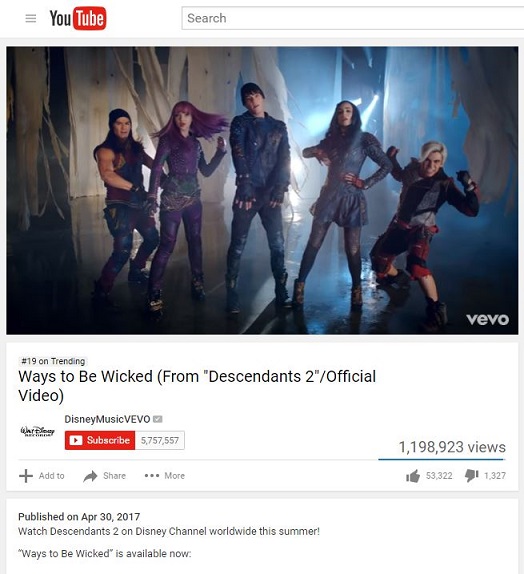 Alessia Cara performed twice during the 5th annual RDMAs. First, she performed the Moana soundtrack entitled “How Far I’ll Go” with Auli’i Cravalho. Their effortless vocal runs shined throughout the song. This performance featured backup dancers and a beautiful sunset ocean backdrop. Jordan Fisher joined them towards the end of the song. He harmonized with Alessia and Auli’i at the end of this performance.

Alessia Cara also performed “Scars to Your Beautiful”, from Know-It-All. After she performed her catchy tune, Radio Disney tweeted this:

“Scars to Your Beautiful” is an empowering self-love anthem. Alessia helps her fans overcome their insecurities and learn to love themselves. She sings these powerful lyrics: “There’s a hope that’s waiting for you in the dark… You’re beautiful just the way you are”. This was a beautiful and moving performance.

Julia Michaels performed “Issues”, her latest hit. Madison Pettis and Peyton Elizabeth Lee introduced her to the stage. They mentioned that she wrote songs for Justin Bieber and Gwen Stefani. Julia Michaels wore a purple outfit, and her backup dancers sported all-black outfits. This upbeat performance featured a backdrop of an outline sketch of a boy and girl with “issues” appearing around it.

Nick Jonas received the Hero Award, which was presented by Jack Black. Before the RDMAs, Demi Lovato showed her support towards Nick Jonas. “Nick, I love you so much. Proud of you. Hope you have an awesome time at the show,” Demi said.

Jack Black introduced Nick Jonas to the stage. He mentioned that Nick Jonas was diagnosed with Type 1 diabetes. Then, Nick Jonas walked up to the stage with a group of kids who also have the disease. He said that we all have the power to change the world. Also, Nick Jonas encouraged others to raise their voice and make a difference. Nick Jonas was honored to receive the Hero Award. He thanked Radio Disney and Jack Black. Nick thanked his personal heroes: his father, mother, and brothers.

Britney Spears received the first-ever Icon Award. Before this, she was honored with a special tribute. Kelsea Ballerini performed “Oops, I Did It Again…”, Hailee Steinfeld sang “Circus”, and Sofia Carson performed “Baby One More Time”. Sofia Carson also gave Britney Spears a shoutout. She thanked Britney with this tweet:

Thank you @britneyspears for inspiring me and every little girl in the world. Thank you @radiodisney and @rdvpgm for this moment. Honored. pic.twitter.com/mK11vusAy8

Jamie Lynn Spears, Britney’s younger sister, presented the first RDMA Icon Award. Jamie introduced Britney to the stage and mentioned that Britney is her favorite pop star of all time. Britney was honored to receive the first-ever Icon Award. She thanked her fans and said they are “the freakin’ best”. Britney also gave a warm shoutout to her two sons.