On September 14, America’s Got Talent received the highest Nielsen ratings of the season. Fourteen million people viewed AGT’s season 11 finale on NBC. The AGT finale took place at the Dolby Theatre. In the end, America picked Grace VanderWaal as the winner.

Grace received $1 million dollars and the headlining slot at Vegas’ Planet Hollywood. The Clairvoyants were this season’s runner-ups. Grace VanderWaal cried tears of joy after winning America’s Got Talent. Howie Mandel said that Grace is “a shooting star” and that she’s “special”. Simon Cowell, Howie Mandel, and Heidi Klum are seen celebrating with VanderWaal here: 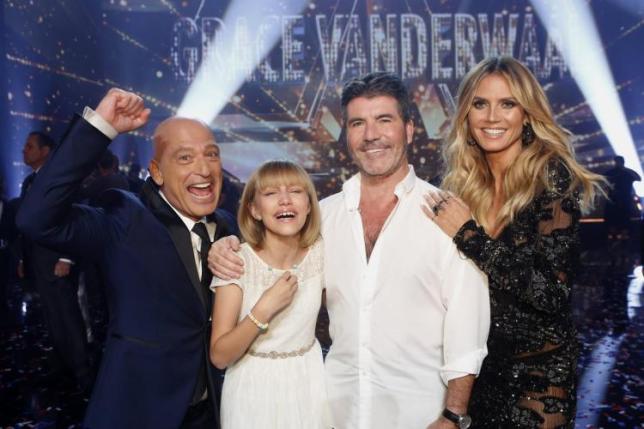 Since day one, Grace VanderWaal attracted NBC viewers because of her innate ability to bring people together with her voice and ukelele. Grace’s AGT audition is unforgettable, as she sang her original tune “I Don’t Know My Name”. This easy going song is about the journey of self-exploration and finding yourself. Grace’s confidence shined through when she sang and played her ukelele. During Grace’s AGT audition, Simon Cowell stated that she is “the next Taylor Swift”. Grace VanderWaal is a genuine, relatable artist. Her music resonates well with people of all ages and attracts fans around the world. Now, Grace’s audition has over 50 million views on YouTube. Click the picture below to see her audition:

Grace VanderWaal received unwavering support from a long list of celebrities that include Ellen and Taylor Swift. See the link at the end of my article to read all of the supportive tweets. A good sport, Taylor Swift expressed her support towards Grace with a gift. The “Blank Space” singer sent Grace a large bouquet of flowers. Grace felt honored, as she posted this to Twitter:

Words can not explain how honored I am for this.. thank. You. SOOOOOOO MUCH!!!! @taylorswift13 pic.twitter.com/KwcvIwGtpq

Ellen DeGeneres also reached out to Grace VanderWaal. On September 15, Ellen went to Twitter to congratulate Grace on her AGT win. Ellen also announced that Grace will soon appear on season 14 of her show. See the tweet below:

You are so amazing, @GraceVanderWaal. America picked right. See you next week on my show. #AGT

With over 247k Twitter followers, Grace VanderWaal is a true rising star. Her story proves that success is attainable with practice, hard work, and faith. Grace VanderWaal will appear on the Ellen show this week. See this article for ARTSNLA’s coverage.

Find out when Ellen is on in your area here.

Grace VanderWaal will also be performing at Planet Hollywood from October 27-29. See the Billboard article here.